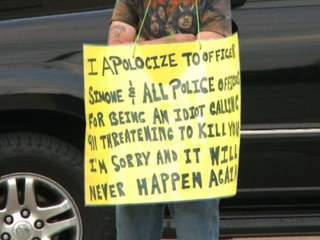 interesting sentence for criminal charge
A judge in Cleveland chooses an interesting sentence for a man that was convicted of  threatening police on a 911 line.  The man said he was #drunk at the time and didn't really know what he was doing but the Judge thought humiliation might be the best type of sentence.  He had to write a sign of apology and stand outside the Cleveland police station for 3 hours a day for a week.  What do you think of this public form of punishment?  Is this fair?  I will guarantee you that others driving by seeing this type of punishment will think twice about doing something similar in this jurisdiction.  It's deterrent affect is hard to argue.  But is it right? Does someone who violates the statute or ordinance in that particular state or city, for that type of criminal charge truly appreciate the potential punishment he/she might face?  It is almost reminiscent on a smaller scale of a scarlet letter.  Maybe this is exactly what we need?  Maybe it's time to bring "John TV" back and show those convicted of certain #crimes on a special TV channel?  What do you think?